Transitioning from Low-Carb to Calorie Counting

I need a new plan this isn’t working anymore. My brother suggested this Soylent diet and I’m reading about it. It reminds me of calorie counting and I’m thinking I may as well try doing that again, it is the only thing that worked consistently but I was also young so who knows if that still works. I also used to feel a lot better overall. It’s really hard to transition to that from low carb.

When I initially lost weight I was 18 years old. I actively made a decision to workout everyday. In my mind, I said to myself that I would keep doing it every day "to see what happens." I worked out with this cheesy Cindy Crawford workout for 40min every day without fail while telling myself that I have to do it no matter what. I usually worked out at night after school and after eating so much pasta and sauce and cheese. After my workout was finished I felt so gross for eating that. After a month of this routine I started to change my eating habits because I felt the food that I ate before my work out in my body and it began to feel disgusting to me to eat 1-2 bowls of that s**t beforehand.

After a while my workout transitioned to running in the morning. I decided that I wouldn’t get to eat until after I ran. I would have something like:
If I’d eat more than my stomach could handle, which was usually when I came home from school (I been doing this after work lately … I’m sure most people do this too), I would correct myself right away by doing crunches and going out for a run. After my meals I would have tea right after instead of going into that routine of having a snack after a meal. I did count my calories sometimes esp. when I needed to correct bad eating habits and get myself back on track.

I plan on starting Wednesday October 14, after I quickly get my weight down since I fucked up. I will begin introducing carbs to my body gradually with melba toast.

Someone I dated kept this photograph taken of me in 1997, which, I have to say is VERY f**kng embarrassing. It is an important reminder of how I progressed up until now because I often forget and minimize my accomplishments and this is a way of taking the credit. That photo was taken right before I lost weight for the first time in my life. The middle photograph was when that guy I dated tweaked a couple of things ... and yelled at me when I tried to eat at night! I needed that and appreciated it. The last one is Today. I look great and still work out but I am always going up and down with this low-carb s**t and it has become an inconsistent and unenjoyable way to live. 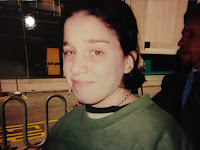